Question received- What is the proper width for a tie?


The answer is directly related to the topic of proportions, which continues here.  As a general rule tie width should be comparable to the lapel width on a suit jacket. Thus, while the actual width in inches or centimeters matters, what is far more important is that the tie and lapels correspond. A suit with narrow lapels would warrant a skinny tie; with wide lapels a wide tie. However neither extreme is particularly desirable. If there is a magic mean it is 3 inches; that is to say that the tie should virtually never be more than an inch above or below that number. For a classic look the ideal range hovers in fractions above 3 inches to below 4 inches in most cases.
The same applies to lapels. Even a lapel that is 3 inches at its widest part is quite narrow overall. I wouldn’t go below that on a jacket if you are going to spend a significant amount of money on it or want to wear it over a long period of time. Generally on a single breasted jacket from 3 to 3-3/4 inches maximum is possible. The only exception is double breasted suits which usually have wider lapels and can go to 5 inches at the edge of a peak.
The other aspect of lapels is the notch. There is a trendy move to place the notches virtually on the shoulders these days, which I would avoid. That is going to look as out of place as the notches that were located down in the middle at a sharp angle in years past. Again use common sense and apply the principle of moderation. Further up is okay but not too far up. The notch should be located somewhere parallel to the shoulder seam armpit, but not too far above the seam so that it is still visible from a lower height.
The photo below is of a new, current “Joseph” suit from the clothier Joseph A. Bank, which manufactures and sells conservative business suits and other clothing. Notice the lapels are fairly narrow while keeping within classic parameters, but still measure 3 inches at their widest part.

In an older suit of a few years ago there would be less territory between the end of the lapel and the shoulder seam, but it could still be worn today without looking out of place. You can see the placement of the lapels is relatively high with the notch facing the end of the shoulder seam. That is about as high as you can safely go and anything more would be too extreme to last. The bottom part of the notch is placed nicely to avoid the vicissitudes of extreme angles. This suit will serve its purpose for many years.
If the above is as thin as you should go the image below is as wide as you can go. In a double-breasted suit like that depicted here lapels can be wider and somehow don't look right if they aren't. This type of suit is less common, although personally I favor them, and they don't change much. 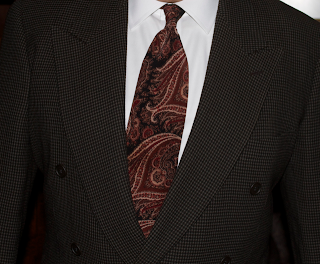 In this instance the tie is wider to stay proportionate to the lapel width. A thinner tie would not look right with this outfit, which is an older Armani Collezioni jacket. If you were to switch the ties from these two outfits they would not look right, but do show correct proportions as depicted. Thus the basic rule is to wear ties that are proportionate to your lapels, depending on the type and cut of the jacket.

TIP: If your tie drawer looks like this, when you reach for one it will likely have folds and creases because of the way you tossed it into the drawer.

The best way to store your ties is to roll them up after you've used them, and keep them in a shallow drawer if you have one. 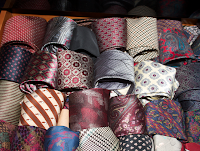 This batch isn't exactly neat, but rolled up like this the ties will be free of unsightly bends and creases. In fact this is also an excellent way to resuscitate a tie that has become bent out of shape. Roll it relatively tightly and you'll be surprised at how well it straightens out after a while.
WebRep
currentVote
noRating
noWeight
Posted by gsarant at 3:37 PM